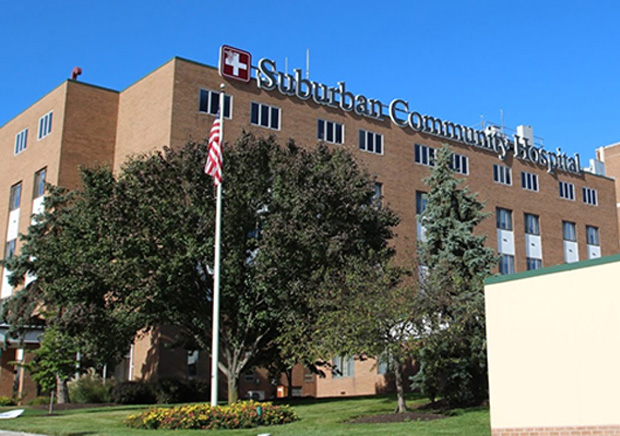 Suburban Community Hospital, originally named Riverview Hospital, opened in 1944. Chartered at 740 Sandy Street in Norristown, PA, Riverview Osteopathic Hospital would provide medical and surgical services to the sick, afflicted and injured, and would educate persons in the care and nursing.

In the mid-1940s and 1950s, the community grew and Riverview Hospital’s occupancy rate increased considerably. In 1958, ground was broken for an expansion wing, that would provide additional patient rooms, a new dining room, an expanded emergency room, and a new elevator. By 1962, Riverview Hospital was operating as an 80-bed hospital with a professional staff of 47 physicians, while becoming a member of the Hospital Association of Pennsylvania.

In early 1970, the ground breaking was held for the East Norriton site. As the steel skeleton framework began to rise, a new name for the hospital was discussed. Sentiment for the old revered Riverview was on the minds of many, while a new hospital, new location and new name was also on their minds. After much discussion and debate, the name Suburban General Hospital was chosen. In 1972, the construction was completed and the ribbon-cutting was conducted. Suburban General Hospital opened its doors as a 153-bed, acute care, teaching hospital.

For more than twenty five years, Suburban General Hospital provided the community with quality health care and services right in their own neighborhood. In 1981, the Suburban General Healthcare System was established. During the ensuing years multiple entities were established under the parent corporation.

Then, in 1997, with the oversight and approval of the Professional Staff and Board of Directors, Suburban General Healthcare System signed a Memorandum of Understanding with Mercy Health System. In January 1999, a Blessing and Dedication ceremony was celebrated by His Eminence Anthony Cardinal Bevilacqua, and Suburban General Hospital became Mercy Suburban Hospital and part of Mercy Health System of Southeastern Pennsylvania.

In order to grow its capabilities even further, in February 2016 the hospital was acquired by Prime Healthcare, a nationally renowned health system consisting of more than 40 hospitals in 14 states, and dozens of affiliated groups and care facilities. As part of that transition, the hospital changed its name to Suburban Community Hospital to reflect its dedication to the community that it’s been part of for more than 70 years.

The hospital is extremely proud to have trained hundreds of physicians throughout the years, many of whom continue to practice in the community and are on staff at Suburban Community Hospital.

In 2004, in response to community growth and development the hospital added a new, “green” addition to house a new 30-treatment room Emergency Department, Laboratory and Surgical Services Suite. Additionally, new equipment and technology was purchased. In the last several years, many areas in the hospital have been modernized.

As Suburban Community Hospital continues to expand the East Norriton location to meet the needs of the community, it is with great pride that we reflect on our beginnings on Sandy Street. With the modern technology and new facilities, patients can be assured that the quality, compassionate care that characterized Riverview Osteopathic Hospital and Suburban General Hospital still embodies Suburban Community Hospital today.

Receive the care you need, from surgical care and wound healing to preventive care and services specifically for the seniors in our community.

Get the care you need without traveling far from home. Our team provides top-quality care in your home community.

Emergency Care When Needed Most

Take comfort in knowing that the emergency care team at Suburban Community Hospital is here for you when you need us the most. 24 hours a day, seven days a week, 365 days a year.